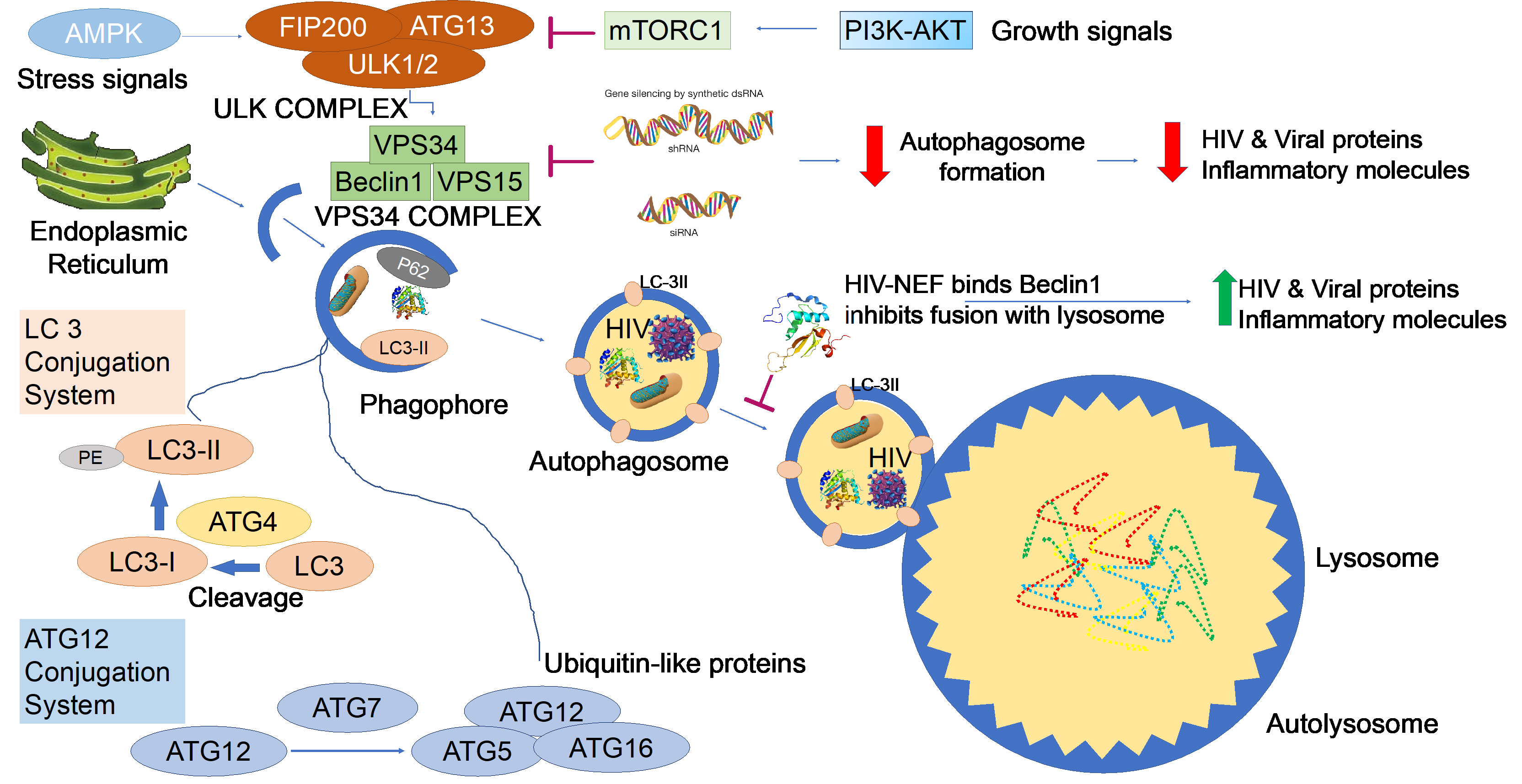 We have shown that activation of the host autophagic pathway by HIV infection represents an essential mechanism in controlling viral replication and virus-induced inflammatory responses in glia. We have discovered that within the autophagy pathway, the protein Beclin1, is highly expressed in post-mortem brain of HIV-infected subjects with neurocognitive impairment ± HIV encephalitis, many of which had a history of polysubstance abuse. Increased protein expression was also detected in HIV-infected primary human glia, while the transfection with small interfering (si) RNA targeting beclin1, significantly reduced autophagosome formation, HIV-replication and HIV ± morphine-secreted inflammatory responses. Inhibition was mediated via the NF-kB transcription factor and the ERK/JNK pathway.

The autophagy pathway is linked with the secretion of Extracellular vesicles (EVs). Exosomes are small, nano-sized vesicles released from virtually all cell types. They play roles not only in the removal of cellular components, but also as intercellular messengers through the delivery of proteins, genomic material, and RNAs including miRNAs to neighboring cells. The El-Hage lab, in collaboration with George Mason University, are investigating EV biogenesis pathway and how EV can regulate cell migration, inflammation, and brain tissue damage during HIV infection, and in combination with opioid abuse.

The El-Hage lab is testing novel treatments to mitigate complications of HIV infection in the CNS and to minimize the neurotoxicity induced by long-term use of antiretroviral therapy. Using a non-invasive methodology for drug delivery, we showed that intranasal delivery of siBeclin1-encapsulated with an anionic-fluorescent labeled liposome was safe and effectively delivered in brain of adult mice. Current studies using HIV-infected mouse model is investigating the efficacy of BECN1 gene silencing as  an anti-inflammatory and anti-HIV therapy in brain reservoirs.

In collaboration with The University of North Carolina, the El-Hage lab is testing the efficacy of novel therapeutic approaches that can alleviate the symptoms of Parkinson's disease (PD). Using transgenic Parkin Q311X(A) mice with slow progression and mild brain inflammation we validated the potential therapeutic efficacy of growth factor-derived macrophages. Glial cell line-derived neurotrophic factor (GDNF) readily migrate to the mouse brain and ameliorate neurodegeneration to a near complete restoration of motor functions in Parkin Q311X(A) mice and improved brain tissue integrity with healthy neuronal morphology. Additional evidence for therapeutic efficacy included diminished neuroinflammation and α-synuclein aggregation, increased survival of dopaminergic neurons, and improved locomotor functions. Currently we are testing other growth factors that are released by activated glia and their ability to restore neurogenesis in PD and other neuropathology.